Ovulation occurs during the midpoint of your cycle when an egg, or ovum, is released from the ovaries. Once the egg is released, it makes its journey from the fallopian tubes to the uterus. You may wonder what ovulation feels like so that you can know when ovulation is happening.

The sensation of ovulation is often described as a dull or sharp abdominal pain that can last just a few minutes or a few days. Light bleeding may also occur. Generally, ovulation happens about two weeks from the start of your last period.

The process is painless for most people, but others will experience what's known as "mittelschmerz"—a German term meaning "middle pain." Mittelschmerz can cause discomfort in the lower abdomen but is rarely cause for concern. It's also totally normal not to feel anything at all. So, don't worry if you don't feel when ovulation happens—or if you experience a bit of discomfort.

When ovulation happens is important to know if you're trying to conceive, or if you're trying not to, because there is only a small window of time when the egg can be fertilized once it's released. If you don't feel it, there are other (more accurate) ways to monitor when you ovulate. Learn more about how ovulation feels, how to know when you're most fertile, and when to contact a doctor.

Approximately half of women will experience ovulation pain during their lives, with about 20% reporting discomfort on a monthly basis.﻿﻿

In most women, the pain is a dull, achy feeling that may last anywhere from a few hours to a couple of days. Other women report feeling a sudden, sharp pain around the midpoint of their cycles.

If you have monthly ovulation pain, you may have noticed you feel it more often on a certain side of your body which is normal. A common misconception is that the ovaries "take turns" releasing an egg each month. However, women may ovulate more frequently from one side.

Ovulation pain is usually mild, though it can be quite painful in women with underlying health conditions. You may experience ovulation pain a few days before or after you ovulate.

Why Does Ovulation Pain Occur?

It's unclear why only some women experience ovulation pain, or why exactly it happens. Some theories include:

Occasionally, a small amount of blood will be expelled from the ruptured ovarian follicle. The blood and fluid from the follicle are released into your pelvis during ovulation which can irritate the lining of your abdomen and cause discomfort.

The pain women experience during ovulation should be manageable and short-lived. If you're feeling extreme discomfort during your cycle, you may have a more serious condition known as endometriosis.

This condition can cause pelvic pain at any time, but it is typically more severe around ovulation and menstruation. Endometriosis can also cause discomfort during sex, making it difficult for women who are timing intercourse to try to conceive.

While a common culprit, endometriosis isn't the sole cause of ovulation pain. Other possibilities include:

Call your doctor if you experience heavy bleeding, fever, or pain for more than a few days around ovulation, as this may signify a more serious condition.

Tracking ovulation is essential when trying to conceive. While you may have heard ovulation occurs on day 14 of your cycle, this is an approximation. Every woman ovulates on their own schedule—including those with a "textbook" 28-day cycle.

Ovulation generally happens between days 11 and 21, which is a wide range. A woman's fertile window lasts from the days leading up to and just after ovulation, as sperm can live up to five days inside the female body.

While ovulation pain is not the only symptom to be on the lookout for when trying to conceive, paying attention to your body's cues is important when timing intercourse.

Research suggests ovulation pain can be felt on the same day the luteinizing hormone (LH) peaks.﻿﻿ This is the hormone ovulation kits use to detect your most fertile days, with levels surging just before you ovulate.

Ovulation pain is one way to determine your body is gearing up to release an egg, but your body has other ways of telling you ovulation is near. Women should also pay attention to their changes in their cervical mucus, libido, and basal body temperature (BBT) to help determine their most fertile days.

Fortunately, there are several options available for relieving mid-cycle pain. These include:

While over-the-counter pain relievers are effective in relieving ovulation pain, some studies have suggested NSAIDs may negatively impact fertility. That said, women with endometriosis are more likely to experience severe ovulation pain, so it's unclear in these cases whether it's the health conditions or medications that are impacting fertility.

If you do prefer to take a pain reliever, acetaminophen has the least evidence of interfering with ovulation.

Which Over-The-Counter Medications Are Safe When Trying to Conceive?

When to Call Your Doctor

Ovulation pain should diminish on its own after a few days. If you're experiencing mid-cycle pain that doesn't go away after a few days or is severe, you should notify your healthcare provider to see if further testing is recommended. Birth control pills that prevent ovulation can be an effective solution for women who are not trying to conceive.

Call your doctor if you experience any of the following symptoms during ovulation:

You should also contact your provider if you have any period-related issues that are new, worsening, or feel abnormal.

More than half of women will experience ovulation pain at some point in their lifetime with 1 in 5 women reporting mid-cycle discomfort each month. These symptoms are usually mild and can be relieved with at-home treatments.

If you're experiencing severe pain at any point during your cycle, contact your doctor to schedule an appointment. Ovulation pain should not be severe enough to disrupt your day-to-day life. Extreme symptoms may signify a more serious condition that requires a diagnosis from your healthcare provider.

16 Truths About Getting Pregnant and Ovulation
3 Sources
Verywell Family uses only high-quality sources, including peer-reviewed studies, to support the facts within our articles. Read our editorial process to learn more about how we fact-check and keep our content accurate, reliable, and trustworthy. 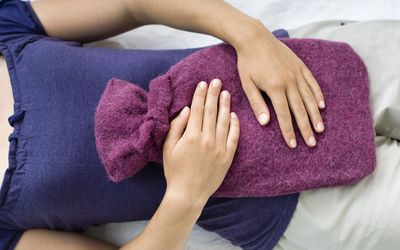