Any kind of pregnancy loss—whether a miscarriage or stillbirth—can be devastating for everyone involved. But there are some common misconceptions about the differences between miscarriages and stillbirths, and if you’ve unsure about what distinguishes one type of loss from another, you are far from alone.

What Is a Stillbirth?

Stillbirths are defined as any pregnancy loss that happens after 20 weeks.

A stillbirth is usually described as when a baby is born without any sign of life, such as breathing, heartbeat, or movement. Stillbirths are not as common as early pregnancy losses—but they are more common than you might realize.

According to the American Academy of Obstetricians and Gynecologists (ACOG), stillbirths are among the most frequently encountered adverse pregnancy outcomes (APOs) and affect about one in every 600 pregnancies.

Stillbirth can happen to anyone, but there are certain factors that can put a person at greater risk. These include medical conditions and complications in the birthing parent, fetal abnormalities/birth defects, and problems with the placenta. Still, as often as 30% of the time, the reasons for a stillbirth are never fully understood.

Symptoms of a Stillbirth

Not everyone will notice signs of stillbirth, and sometimes babies who have experienced fetal demise will only be identified by routine monitoring by a healthcare provider—such as electronic fetal monitoring, an ultrasound, or fetal heartbeat doppler readings.

In other cases, a person may experience some key warning signs during their pregnancy, says Dr. Daniel Roshan, MD, high-risk maternal-fetal OBGYN in New York City.

“Depending on the gestational age of the fetus, signs of fetal distress or demise are a decrease in or absence of previously known fetal movements,” Dr. Roshan describes. “For earlier pregnancies when fetal movement cannot be appreciated yet, spotting/bleeding or abdominal cramping as well as leaking of watery fluid from the vagina are possible serious signs of imminent risk of pregnancy loss and ultimately stillbirth.”

How Is a Stillbirth Diagnosed?

Most of the time, stillbirths are diagnosed while the fetus is still in utero. The patient may report bleeding, lack of movement, or other signs of possible fetal demise to heir OB/GYN or midwife. Oftentimes, a provider won't find a heartbeat, and then a follow-up ultrasound will be done to confirm the stillbirth.

In other circumstances, an expecting parent might not know of the stillbirth until after delivery. This is less common than a diagnosis before giving birth or during labor, but it does happen.

Most of the time, however, if a patient receives electronic fetal monitoring during labor, healthcare providers will know that the baby has died in utero before birth occurs.

If a baby has died in utero, the medical team will do their best to support the patient during this difficult time, explains Andrea Desai, MD, an OB/GYN with the University of Maryland Medical Center and an assistant professor at the University of Maryland School of Medicine. “Once a baby passes away in utero, the next step in management is to deliver the stillborn fetus,” she explains.

Options for delivery will be discussed, and will be based on the fetus’s gestational age and other clinical aspects of the pregnancy. “Often, we will discuss giving medications to provoke labor and birth (also called induction), as vaginal birth is often strongly encouraged to reduce maternal risk and hospitalization time,” Dr. Desai explains.

The parent's mental health is of utmost importance at this time, and the care team will be aware of this. Often, parents want to know why their baby died in utero.

While there isn’t always an answer—one in three stillbirths don’t have a known cause—many parents will want the cause investigated, and the medical care team can arrange that, says Dr. Desai. Most hospitals have support teams and bereavement resources, as well as opportunities for parents to preserve their baby’s memory, she adds.

What Is a Miscarriage?

A miscarriage is defined as a pregnancy loss that happens within the first 20 weeks of pregnancy. Miscarriages are, unfortunately, quite common, with one in 10 pregnancies ending in miscarriage. These statistics sounds scary, but it can also be helpful to keep in mind how common miscarriages actually are, says Dr. Desai.

“Patients who experience this complication often feel alone and [can] suffer in silence because as a society, we don't do a great job of telling pregnant people that this outcome happens to many people attempting to conceive,” she describes.

A lot of times, there is no obvious reason for a miscarriage, and miscarriages are not usually caused by something you ate, or activities like strenuous exercise, working, or accidents/falls. In at least half of all cases, the embryo never properly developed because of genetic abnormalities. The older a birthing person is at conception, the more likely they are to have a miscarriage.

Symptoms of a Miscarriage

The most common symptoms of miscarriage are cramping or bleeding, says Dr. Roshan. Other symptoms may include spotting, a sudden gush of fluid from your vagina, or the passage of tissue from your vagina. Cramps may be mild or severe, and sometimes no cramps are experienced.

In some pregnancies, however, miscarriages can occur without symptoms, Dr. Roshan says. This is called a missed miscarriage.

“A patient may have a routine ultrasound with a fetal heartbeat present and may feel no cramps or experience vaginal bleeding, but when they return for a viability ultrasound, a heartbeat may no longer be detected,” he describes.

If you are experiencing a miscarriage, your healthcare provider will walk you through the physical and emotional steps of the process carefully, says Dr. Desai.

Some people will be able to handle their miscarriage at home, especially if bleeding isn’t too heavy, she explains. “We will always advise patients on warning signs/symptoms of losing too much blood and when to come to the hospital,” she explains.

If you are experiencing a “missed miscarriage” and the process of miscarrying is not yet underway, you will have a few choices.

“Patients who have not yet started to miscarry will be given the option of waiting for a few days to see if a miscarriage will occur naturally; taking a medication to provoke miscarriage; or of having a surgical procedure to remove the pregnancy,” Dr. Desai says. No matter what you choose or what you are experiencing, your healthcare provider will be in touch to monitor your physical and emotional state over the weeks following your miscarriage, she assures.

Differences and Similarities Between Stillbirths and Miscarriages

The main difference between a stillbirth and a miscarriage has to do with when in a pregnancy they take place, says Dr. Roshan.

“A delivery or demise prior to 20 weeks gestation is typically described as a miscarriage, whereas a preterm delivery or demise of a fetus 20 weeks or greater is considered to be a stillbirth,” he explains. “Most people associate miscarriage with an early pregnancy loss, but we actually use the term into the second trimester.”

Dr. Desai says that mixing up these words is common.

“Many patients confuse these two terms,” she says. “I have noticed that patients often use [miscarriage and stillbirth] interchangeably because they may not know that they are defined by when they occur during pregnancy.”

Ultimately, the terminology you use to describe your loss doesn't matter as much as getting the proper medical and mental health care as you move through your experience.

Mental Health After Stillbirth or Miscarriage

The fact is, any type of loss during pregnancy can be extremely upsetting, and parents deserve to have their grief heard and understood in all circumstances. It’s also important to understand that there is no one right way to grieve—the process looks different for everyone.

“The pace is different for each individual and there is no ‘normal’ when it comes to experiencing this kind of grief,” Dr Desai says. “A wide range of emotions such as sadness, anger, frustration, guilt, anxiety, and fear may be experienced by the couple who lost their pregnancy.”

It’s common for people who have experienced pregnancy loss to feel isolated, and it can be hard to share what you are going through with others. That’s why amassing a support system is important. Consider communicating how you're feeling with friends and loved ones, or potentially meeting with a mental health professional who specializes in perinatal loss.

Either way, both stillbirths and miscarriages can have deep emotional impacts. That’s why it’s imperative that you get mental health support if you are finding the grieving process difficult to navigate. Be sure to reach out to a counselor or your healthcare provider if you are struggling with your mental health following any kind of pregnancy loss.

Low-Dose Aspirin and Miscarriage
7 Sources
Verywell Family uses only high-quality sources, including peer-reviewed studies, to support the facts within our articles. Read our editorial process to learn more about how we fact-check and keep our content accurate, reliable, and trustworthy. 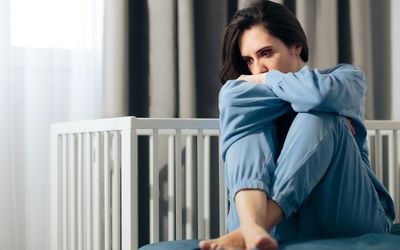