John is an ever-popular name. It's a familiar, but very traditional name with biblical origins. The name John is derived from the Hebrew Yohanan, meaning “graced by God.” It is a solid, traditional name that exudes strength, smarts, and kindness.

How Popular Is the Name John?

John continued to be among the top 10 names for boys in America through 1986, and stayed in the top 20 until 2009. The 2020 statistics rank the name John as the 27th most popular name for boys in the United States.

As it is a biblical name, John has an equivalent in virtually every known language. These include:

People named Jonathan often use “Jon” (without an H) as a nickname, and since it's pronounced the same way, this is sometimes viewed as a variant spelling of John.

In fact, Jon/Jonathan is based on an entirely different name in the Bible: Jonathan derives from the Hebrew Yonatan (“given by God”), whereas John comes from Yohanan (“graced by God”).

Other boy names from the New Testament include:

Jack or Jackie are frequent nicknames for John. For example, U.S. President John F. Kennedy was known to his friends as Jack.

The name Jack is very common in English literature. It is often associated with naivete and youth, as in several Mother Goose nursery rhymes (“Jack and Jill,” “Little Jack Horner,” “Jack Be Nimble,” “Jack Sprat”), as well as the tale of “Jack and the Beanstalk.”

Another nickname, Johnny, also expresses youth but is associated with heroic figures such as Johnny Appleseed or Johnny Tremain.

The best known Johns of the Bible are John the Baptist and John the Apostle, who is credited as the author of several books of the New Testament.

Although John has been a common name throughout English history, there was only one king of England called John—King John, who reigned from 1199 until his death in 1216. 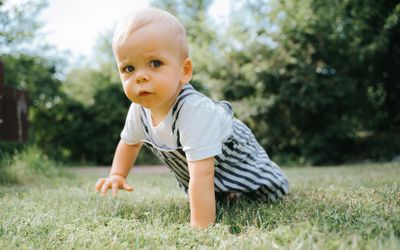