Other causes of bleeding during early pregnancy include ectopic pregnancy and infection. Since these can be dangerous, it is important to know how to recognize implantation bleeding and to get medical attention if you experience bleeding in pregnancy.

Implantation bleeding happens during the very early stages of pregnancy. It appears as a smear of blood on your underwear or toilet paper a few days before or after the time when you can first test positive on a pregnancy test. Implantation means that a fertilized egg has implanted, or attached to the wall of the uterus. It occurs around ten days after fertilization. Sometimes, a small amount of bleeding or spotting happens around this time.

Implantation bleeding does not affect the viability of a pregnancy and is not a cause for concern. Similarly, not having implantation bleeding is also OK and should not worry you. But it is important to recognize that it is a sign of pregnancy and not a period. If you know you are pregnant, you can discontinue activities that may affect your developing baby, such as smoking, drinking alcohol, or taking certain medications.

If you have unusually light bleeding around the time of your menstrual period and the bleeding does not turn into a heavier flow (one that is more typical for you), it's a good idea to take a pregnancy test. A few spots of blood or a light flow should not be taken as a period or as a sign that you are not pregnant—you could be.

Bleeding from an impending miscarriage or chemical pregnancy (a nonviable pregnancy) may begin as spotting and then turn into a heavier flow with visible clots and a dark red color, similar to a heavy menstrual period. In contrast, implantation bleeding may appear as a brown or lighter-colored discharge without clots. It is a lighter flow that lasts only a few hours to a few days.

Additional signs that you may be experiencing a miscarriage rather than implantation bleeding include cramping and passing tissue through the vagina.

The best way to determine the cause of early pregnancy bleeding is to visit a healthcare provider. They are likely to do an hCG blood test or an early pregnancy ultrasound, in addition to a thorough medical history and physical examination.

An hCG blood test measures the pregnancy hormone, human chorionic gonadotropin (hCG), which is made by the placenta after the fertilized egg implants into the lining of the uterus. With ultrasound, a gestational sac becomes visible around five weeks after your last menstrual cycle if you are pregnant, and an embryo or fetal pole is visible at the end of the sixth week.

Other Causes of Early Pregnancy Bleeding

Some people who are pregnant also experience light bleeding after sex or after a pelvic exam, due to the development of blood vessels in the cervix. Or, vaginal bleeding during pregnancy may be a sign of an infection of the cervix, vagina, or urinary tract.

Vaginal bleeding may also be a sign of an ectopic pregnancy, which occurs when a fertilized egg implants into one of the fallopian tubes instead of the lining of the uterus. Other symptoms may include pain in the abdomen, pelvis, or even the shoulder, but sometimes vaginal bleeding is the only sign.

An ectopic pregnancy is a dangerous condition because the fallopian tube can tear open and cause internal bleeding, so it is important to seek medical attention if you are experiencing these symptoms. The fertilized egg in the fallopian tube needs to be removed with surgery or medication.

If you are experiencing any vaginal bleeding during pregnancy, contact your healthcare provider. While it's natural to worry about a possible miscarriage, there could be a number of reasons for spotting in early pregnancy, including implantation bleeding. A healthcare provider can identify the cause of your bleeding and make a treatment plan if necessary. 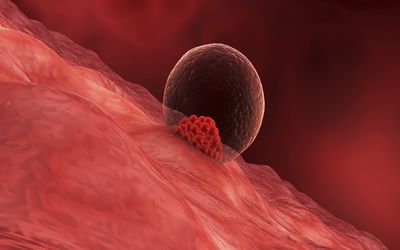