Can Triplets Be Identical?

Triplets are three babies carried in the same womb during a single pregnancy. Like twins, triplets and other higher-order multiples can be categorized by their zygosity or degree of genetic similarity. Though triplets are most commonly fraternal (dizygotic or trizygotic), it is possible for triplets to be identical (monozygotic).

While many people are familiar with the terms "identical" and "fraternal" in describing multiples and use them to describe whether twins or triplets look similar, what these terms actually refer to is how the multiples formed in utero.

What Are Super Twins?

Research on the prevalence of monozygotic triplets varies. A 2012 case report of a healthy set of spontaneously conceived three identical triplet boys lists the incidence at 1 in 100,000 live births. Most reported cases are conceived through assisted reproductive techniques.

Most triplets are trizygotic, meaning that each individual formed from a separate zygote, or egg and sperm combination. They are commonly described as "fraternal" multiples and share the same genetic similarities as any siblings.

However, it is not uncommon for triplets to be dizygotic, which occurs when two separate eggs are each fertilized, and one of the fertilized eggs then splits into two. Essentially, two of the triplets are monozygotic (identical) twins, sharing the same general DNA characteristics, while the third triplet having been conceived with a different egg and sperm has a unique genetic makeup from the other two.

There are a few pregnancy symptoms that could indicate you might be having triplets. These may include high levels of human chorionic gonadotropin (hCG) or alpha-fetoprotein in the blood, or severe morning sickness. But the only way to truly confirm multiple pregnancies is via ultrasound testing,

According to a guide by the American Society for Reproductive Medicine (ASRM), multiple pregnancy is "more common in women who utilize fertility medications to undergo ovulation induction or superovulation." It also notes that among women who undergo fertility treatments, still less than 1% of them have triplets or other multiples.

Superovulation may be part of assisted reproductive technology treatments like in vitro fertilization (IVF). It means that multiple eggs are released through the use of fertility drugs, rather than a single egg that would usually be ovulated in the course of a menstrual cycle.

Causes of Identical and Fraternal Twins
3 Sources
Verywell Family uses only high-quality sources, including peer-reviewed studies, to support the facts within our articles. Read our editorial process to learn more about how we fact-check and keep our content accurate, reliable, and trustworthy. 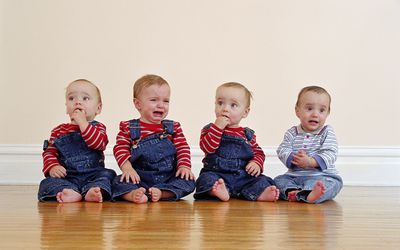 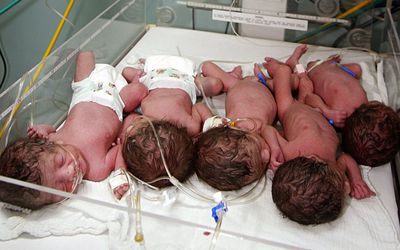 Everything You Need to Know About Quintuplet Multiple Births