Whether you're raising an energetic child or you're dealing with a strong-willed one, there are certain child behavior problems that are common at one point or another. The way you respond to these behavior problems play a major role in how likely your child is to repeat them in the future.

There are three main reasons kids lie: to get attention, to avoid getting in trouble, and to feel better about themselves.﻿﻿ Distinguishing the reason for the lie can help you determine the best course of action.

When you catch your child in a lie, ask, "Is that what really happened or what you wish would have happened?" Give your child an extra consequence for lying. Emphasize the importance of honesty by creating a household rule that says, "Tell the truth."

Praise your child when they tell the truth—especially when the truth could get them in trouble. Say something like, "I'm so proud of you for being honest about eating that cupcake after I said no. I'm still going to take away your video games today but because you told the truth you won't lose your game for tomorrow too."

When your child is defiant, offer a single when... then warning. Say, "When you pick up your toys, then you will be able to watch TV."

If your child doesn't comply after the warning, follow through with a consequence. With consistency, your child will learn to listen the first time you speak.

Too Much Screen Time

Another common child behavior problem is resisting screen-time limits. Whether your child screams when you tell them to shut off the TV or plays a game on your phone whenever you're not looking, too much screen time isn't healthy.﻿﻿

Establish clear rules for screen time. If your child becomes too dependent on electronics for entertainment, dial back the screen time even more.

Take away electronics when your child breaks the rules and be a healthy role model. Consider establishing a periodic, family-wide digital detox to ensure that everyone is able to function without their devices.

You may be dealing with a picky eater. Or perhaps your child claims to be hungry every 10 minutes, or sneaks food during times when it is not allowed. Food-related behaviors can lead to power struggles and body image issues, so it's important to handle them carefully.

Avoid saying things like "vegetables are healthy." Kids tend to think healthy food tastes bad. Instead, talk about how delicious vegetables and other nutritious foods are. Instead of trying to please everyone at every meal, serve one balanced meal that is healthy for everyone, and set limits on snacking.

Name-calling, throwing things, and mocking you are just a few of the common behavior problems that show disrespect. If disrespectful behavior is not addressed appropriately, it will likely get worse with time.

If your child's intent is to get your attention, ignoring can be the best course of action. Show your child that sticking their tongue out at you doesn't result in the reaction they're looking for.

If your child calls you a name, for example, firmly and calmly speak to them about using kind words. Make clear that you will not allow them use that language at home.

Whining can be a bad habit—especially if it helps your child get what they want. It's important to curb whining before it becomes an even bigger problem.﻿﻿

A good first course of action is ignoring. Show your child that whining won't get you to change your mind. Give positive attention when they stop whining.

Additionally, teach your child more appropriate ways to deal with uncomfortable emotions, like disappointment. Show them that saying, "I'm sad we can't go to the playground today," will get them much better results than repeatedly whining about how unfair it is that you won't take them to play in a thunderstorm.

Young children tend to be physically impulsive, so it's not unusual for a 4-year-old to hit. Older children are more likely to be verbally impulsive, meaning they may blurt out unkind statements that hurt people's feelings.

There are many things you can do to teach your child impulse control skills.﻿﻿ One simple way to reduce impulsive behavior is by praising your child each time they think before they act or speak. Say, "Great job using your words when you felt angry today," or "That was a good choice to walk away when you were mad."

Teach anger management skills and self-discipline skills as well. Gaining control over emotions will help your child control behavior too.

Whether your child refuses to stay in bed or they insist on sleeping with you, bedtime challenges are common. Without appropriate intervention, your child may become sleep-deprived.

Lack of sleep has been linked to increased behavior problems in young children.﻿﻿ And sleep deprivation can lead to physical health issues, as well.

Establish clear bedtime rules and create a healthy bedtime routine. Consistency is key to helping kids establish healthy sleep habits. So even if you have to return your child to their room a dozen times in an hour, keep doing it. Eventually, their bedtime behavior will improve.

What Do I Do About My Toddler Playing With His Penis?

Your child's aggressive behavior might mean throwing a math book when they're frustrated with homework. Or it could lead to outright punching a sibling when they're mad about some other situation.

Some kids become aggressive because they don't know how to handle their feelings in a socially appropriate way. Others are perfectionists who melt down every time things don't go the way they planned.﻿﻿

Aggressive behavior is normal for toddlers and preschoolers. But aggression should decrease over time as your child grows and gains new skills.

Give your child an immediate consequence for any act of aggression. Take away a privilege and use restitution to help your child make amends if they have hurt someone. If aggression doesn't get better over time, seek professional help.﻿﻿

Temper tantrums are most common in toddlers and preschoolers. But they can extend into grade school if they aren't addressed swiftly.

Ignoring can be one of the best ways to handle tantrums. Teach your children that stomping, screaming, or throwing themselves to the floor won't get them what they want. It's also important to show them better and more effective ways to express their needs and get those needs met.﻿﻿

Child behavior problems are best addressed with consistent discipline strategies. Keep in mind that it's normal for kids to regress once in a while. Your child may revert back to baby talk at age eight or grow defiant again after months of compliance. Phases like this are normal and may be just a developmental process your child needs to go through.

But if behavior problems aren't responding to your discipline strategies, or your child's behavior has started disrupting their education and peer relationships, talk to your pediatrician. You'll want to rule out any underlying developmental issues, learning disabilities, or medical conditions.

How to Prevent Behavior Problems Before They Start
9 Sources
Verywell Family uses only high-quality sources, including peer-reviewed studies, to support the facts within our articles. Read our editorial process to learn more about how we fact-check and keep our content accurate, reliable, and trustworthy.
Additional Reading 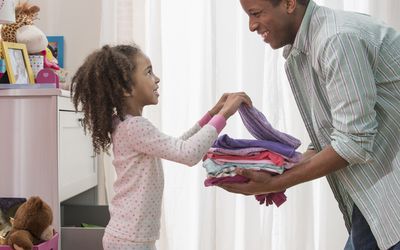