Emily Nadal is a freelance writer specializing in pregnancy and maternal health. She holds a master's degree in health and science journalism from the Craig Newmark Graduate School of Journalism. She also has experience working in television news at local stations in New York City.

As more states begin to legalize the recreational use of marijuana, many researchers are digging into questions about the implications of cannabis use across different aspects of life. Since 2020 alone, six states have decriminalized marijuana use. There are now a total of 19 states, plus the District of Columbia, where marijuana is legal.

With the wave of decriminalization, researchers at Washington University in St Louis, Missouri wanted to understand the long-term effects of cannabis exposure on fetuses in utero. Back in 2020, the researchers decided to look at mental health indicators for thousands of 9 and 10-year-old kids who had varying degrees of cannabis exposure in the uterus. They also intended to follow up with them over the course of their adolescent and teenage years to track any changes.

The outcomes of the initial study showed that children who were exposed to cannabis in the uterus were more likely to have issues with things like sleep or cognitive performance. In September 2022, the Washington University researchers published their first follow-up with the same cohort of subjects, now 11 and 12 years old. The results showed those same problems persisted, and some were exacerbated in children who were entering a critical time for mental health: the teenage years.

The Initial Study on Cannabis Exposure in Utero

The cannabis exposure research is part of a nationwide Adolescent Brain Cognitive Development (ABCD) study, which is a long-term look at brain development and child health. Institutions around the country are utilizing data compiled from thousands of children and parents in order to answer big questions about brain development throughout childhood.

In 2020, Washington University researchers studied a sample size of 10,600 children whose parent smoked marijuana for different amounts of time while they were pregnant. For some, the marijuana use was before they knew they were pregnant, or when the fetus was about four to six weeks developed. Others smoked well into their pregnancy.

The study was trying to understand whether the children who were exposed showed a broad range of mental health symptoms by the time they were 9 or 10. David Baranger, PhD, who was one of the researchers involved in the follow-up study, explained there were five specific categories of symptoms the team was looking for when reviewing the findings, such as aggressive behaviors or attention symptoms.

“They found that kids whose [parent] smoked cannabis when they were pregnant, those kids had elevated mental health symptoms,” Dr. Baranger said.

They found that kids whose mother smoked cannabis when they were pregnant, those kids had elevated mental health symptoms.

Dr. Baranger added there was a range of caveats associated with the results, like the fact that the study was observational, pointing out that other factors could have contributed to the symptoms aside from cannabis use.

“We can't rule out the possibility that the elevated symptoms reported are perhaps not due to cannabis [exposure], but other factors that we weren't able to measure,” Dr. Baranger said.

The results should also be taken with a grain of salt, Dr. Baranger emphasized. While the study does tell us a bit about what cannabis can do to a developing fetus, he said the effect is small and there really isn’t much definitive research done yet to give conclusive answers. Still, he says it’s important to keep in mind.

Can Smoking Weed Affect Your Chances of Getting Pregnant?

Two years after the initial study, researchers followed up with those same children, who are now approaching their adolescent years. Dr. Baranger explained this age is a critical point to study because adolescence is an important time period for many mental health disorders.

“Adolescence is a time when [children] first really experience a heavy level of symptoms and might meet criteria for a diagnosis,” said Dr. Baranger. “So it suggests that they might be at higher risk for a full-blown mental health disorder in adolescence.”

The goal of the follow-up 2022 study was to see whether those children who presented symptoms of a mental health disorder two years ago had any changes to the symptoms. Researchers found that overall, there wasn’t much of a change from their original findings: children exposed to marijuana in utero had elevated mental health symptoms, including depression and anxiety.

“Once they hit 14 or 15, we’re expecting to see further increases in mental health disorders or other psychiatric conditions—increases that will continue into the kids’ early 20s,” Baranger said in a Washington University press release about the study.

Once they hit 14 or 15, we’re expecting to see further increases in mental health disorders or other psychiatric conditions — increases that will continue into the kids’ early 20s.

Longer-Term Effects on Teenagers and Beyond

Researchers will continue to follow up with the cohort as they progress into their adolescent and teenage years to see if cannabis use in pregnancy continues to correlate with adverse mental health symptoms, though it’s hard to know for sure.

“We don't have great measurements for people's substance use during pregnancy,” Dr. Baranger said. “It's pretty crude. We're filling in that gap and looking at early development from birth to 9 or 10. We'll have more answers in the next five years or so.”

Once the research team has a more filled-in data timeline, they can begin to craft more conclusive answers as to how cannabis exposure in utero affects children throughout their life. In the meantime, Dr. Baranger explained that the further legalization of marijuana is aiding in a better understanding of the drug’s effect.

“One of the side effects of all of the legislation surrounding cannabis, historically, is that it's been very hard to do research on it,” said Baranger. “It's generally being treated as a fairly benign, natural, alternative substance that you can use in a lot of cases. And we actually don't know whether or not that's true. As more and more people are using cannabis, and more pregnant people are using cannabis, it's important to research what those effects might be. That's why we're [studying] it.”

The Dangers of Using Marijuana While Pregnant

Michelle E. Ehrlich, MD, is a pediatric neonatal neurologist at Mount Sinai Kravis Children’s Hospital who studies opioid use in pregnancy. While her expertise isn’t in marijuana use specifically, she says most people who are using opioids while pregnant are also using other drugs like marijuana. She explained there is controversy surrounding the question of whether newborns experience withdrawal from marijuana at birth.

Dr. Ehrlich explained that it’s hard to tell exactly what the effects of marijuana use are on fetuses exposed in utero, both in the immediate and long term. Historically, the real concern has been linked to the same risk of tobacco use while pregnant, which is mainly a low birth weight, but that’s more connected to the actual practice of inhaling smoke, rather than the marijuana itself.

It’s also a difficult factor to accurately study, as both Drs. Ehrlich and Baranger pointed out. You cannot tell a pregnant person to smoke marijuana for research purposes and if you get subjects to participate, it will involve a lot of testing and a lengthy history, which Dr. Ehrlich says can be problematic.

“So much more needs to be done in terms of both human and preclinical studies,” Ehrlich said. “There are so many variables.”

Dr. Ehrlich added there has been some advocacy surrounding marijuana use for pregnant people to treat morning sickness. But she says that is not recommended because of the uncharted consequences.

While cannabis is becoming more widely available, it’s still tough to pinpoint what the long-term outcomes are for children whose parent smoked marijuana while pregnant. Many researchers are just beginning to study and understand marijuana’s effect on fetuses and development. Until more is known, medical professionals are erring on the side of caution by continuing to advise pregnant people to refrain from using marijuana.

While research is currently continuing to learn how exactly exposure to marijuana in utero affects children as they grow, the best advice from experts is not to smoke cannabis as soon as you find out you're pregnant. According to one study out of Washington University, children who were exposed to cannabis in utero showed mental health effects at ages 9 and 10. Researchers found those effects persisted at ages 11 and 12. The legalization of marijuana in states across the country is allowing researchers to study the effects even further. If you have any concerns about smoking marijuana while even unknowingly pregnant, talk with your medical provider.

By Emily Nadal
Emily Nadal is a freelance writer specializing in pregnancy and maternal health. She holds a master's degree in health and science journalism from the Craig Newmark Graduate School of Journalism. She also has experience working in television news at local stations in New York City. 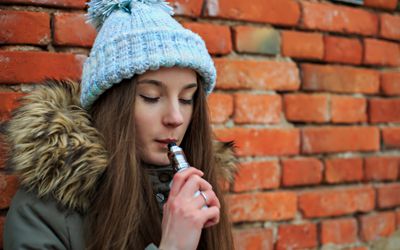 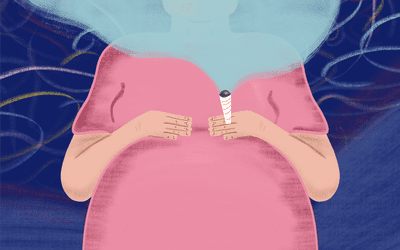 Can I Smoke Weed While Pregnant? 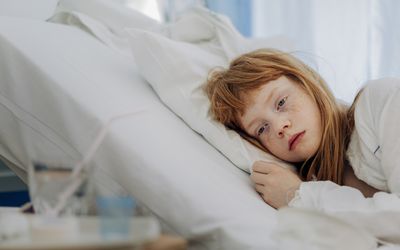 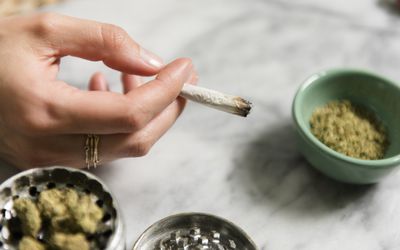 Has Cannabis Legalization Increased Use During and After Pregnancy? 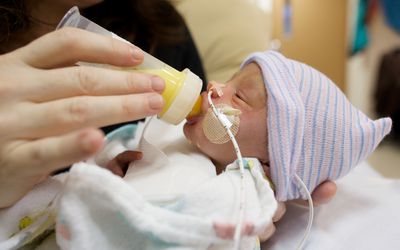 Marijuana in Breastmilk Has No Short-Term Effects, Study Shows 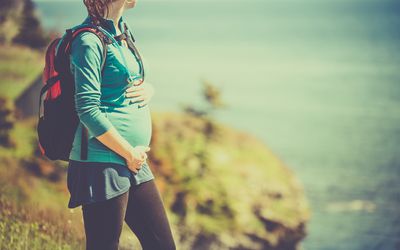 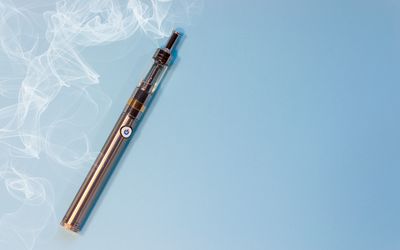 The Dramatic Rise in Vaping Among Teens Is Dangerous—Here's Why 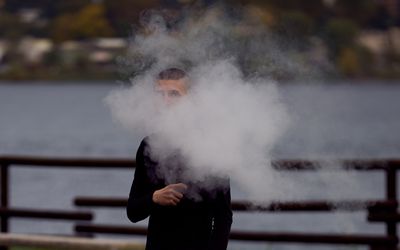 Marijuana Use in E-Cigarettes Has Increased Among Youth, Study Finds