One of the exciting parts of a pregnancy is finding out the sex of your baby. Some people don't have a preference, while others might have secret hopes. Turns out there might be a way to stack the odds in your favor.

Kathryn Taylor's book, "The Babydust Method: A Guide to Conceiving a Girl or a Boy" claims that you can choose your baby's sex by timing intercourse correctly.

Real Science: How to Get Pregnant With a Boy...or a Girl!

According to the Babydust Method, having sex two to three days before ovulation is likely to result in a girl. If you want a boy, you should have sex the day of ovulation and then again 24 hours later.

"My method is based on the latest scientific evidence that suggests by altering the timing and frequency of intercourse relative to ovulation, couples can influence the sex of their baby," says Taylor. "The book is based on data collected in laboratory tests, as well as animal and human studies."

You can take ovulation tests to pinpoint the day of ovulation. These are at-home urine tests that measure luteinizing hormone. If you want a boy, wait until you see the test line get as dark or darker than the control line.

But if you want a girl, you have to estimate when you are two to three days ahead of ovulation. Tracking ovulation for at least three months will help you get an idea of your body's usual patterns. You do this with ovulation tests or by taking your basal body temperature every morning. A temperature spike means that you have already ovulated.

To understand how this works, let's talk about how babies get their biological sex. At conception there is an egg, which always contains an X chromosome. There are also tens of millions of sperm, each of which has either an X chromosome or a Y chromosome.

I didn't think it would necessarily work, but we knew we wanted a third baby anyway, so I figured I would try this method and hope for the best.

Courtney, a mom of three in McKinney, Texas, tried the method after having two boys. After her OB/GYN told her about the science behind "gender swaying," she decided to give it a shot. "I always wanted a little girl," she says. "I didn't think it would necessarily work, but we knew we wanted a third baby anyway, so I figured I would try this method and hope for the best."

Courtney tracked ovulation for three months prior to trying to conceive to get an idea of when she usually ovulated and what her symptoms were. The first month she tried using the Babydust Method, she didn’t get pregnant. But the next month, she did.

"We were really nervous to open the [sex testing] results because we knew this was likely our last baby and our last shot," she says. "But it said girl and now she's here and the perfect little girl I always wanted."

Haley, a nurse who lives in California wanted her second child to be a boy because she only wanted two children, and she already had a girl. She was intrigued by the science behind the Babydust Method, but her husband was skeptical.

When Haley first conceived, she had an ectopic pregnancy. She was then put on medication, and couldn't try again for three months. During these months, she tracked her ovulation by doing LH strips twice daily and taking her basal body temperature every morning. When the couple started trying again, they found it difficult to stick with the method.

"We just wanted to have another baby so bad," says Haley. "On top of that, my husband travels a lot for work so sometimes it was stressful and there were some occasions that he wasn’t home at the optimal time and we missed our window to sway."

Eventually, Haley conceived again after having intercourse 12 and 24 hours after getting a positive ovulation test result. They found out that their baby was a boy, like they had hoped, at 12 weeks gestation.

Can You Actually Pick the Sex of Your Baby? Our Experts Weigh In

Those who believe in the Babydust Method claim that it has a fairly solid success rate, but experts in the medical field are not fully convinced.

"According to our best evidence in the medical literature, this method simply gives you a 50/50 chance," says Sam Rahman, MD, a board-certified OB/GYN and clinical assistant professor of OB/GYN at Northwestern Feinberg School of Medicine in Chicago. "You have the same chance of getting a boy or girl as you would if you had sex on any day in the fertility window."

According to our best evidence in the medical literature, this method simply gives you a 50/50 chance.

According to Dr. Rahman, the only way to actually pick the sex of your baby is through invasive techniques like flow cytometry and preimplantation genetic diagnosis with in vitro fertilization (IVF). "With this technique, you have to undergo the process of IVF and then before the implantation of the embryo occurs, the embryos are tested for potential genetic diagnosis and the gender of the baby," she notes.

There may be plenty of anecdotal evidence to support the Babydust Method, but there haven't been studies that can fully back it up, at least not yet. "No timing, position, diet, or other methods has scientifically been proven to increase the chances of having a boy or girl," says Jenna Turocy, an OB/GYN and fertility expert at Columbia University Fertility Center. Abstaining from sex on either the day of ovulation or on the days before may also hurt your overall chances of getting pregnant. "This decreases your chances of having a boy or a girl," notes Dr. Turocy.

Other than the fact that abstaining from sex on certain days during your fertile window can lower total chances of conceiving, attempting to "gender sway" won't do any harm.

While some parents-to-be don't have a preference on the sex of their baby, others may look for ways to increase their chances one way or another. The Babydust Method suggests timing intercourse around ovulation to help "choose" the baby's sex. While the book's author claims a high success rate, experts we spoke with say the chance of having one sex over another is still 50-50. 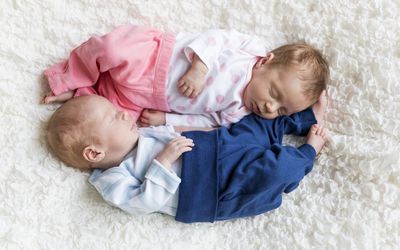 Choosing the Sex of Your Baby