Learn about our Medical Review Board
Fact checked by Marley Hall

If you or someone you know is trying to get pregnant, you may have heard well-meaning advice like, "Just relax, and it will happen!" But the truth is a bit more complex.

Whether stress itself can make getting pregnant difficult is still a matter of debate. What is definitively known, however, is that there are stress-related factors that can make it harder to conceive.

Research on Stress and Fertility

There have been studies that link stress to lowered fertility, but there is also research that suggests otherwise. The American Society for Reproductive Medicine states, "Even though infertility is very stressful, there isn't any proof that stress causes infertility." And in the case of moderate stress, a 2019 study noted no negative effect for women who were trying to conceive.

Even so, other studies demonstrate the opposite effect. A 2018 study by the Boston University School of Public Health, for example, found that women who had high levels of perceived stress experienced lower levels of fertility than those with less stress. Researchers also observed that in situations where one partner was significantly more stressed than the other, there was a lowered chance of conception.

It is important to note that despite a lack of long-term effects on the ability to get pregnant, extreme stress can affect fertility in the short term. For example, you may experience an irregular period during an unusually stressful time, but then find your cycle returns to normal after the heightened anxiety has passed.

The Research on Stress and Infertility

Stress can push people toward unhealthy behaviors that have been proven to impact fertility. For example, when you're stressed out, you may:

All of these are habits that can affect your ability to conceive, so it's worth exploring each of them.

If your work schedule or lifestyle leads to frequent late nights with early wake-up calls, the constant lack of sleep can affect your body and your fertility.

Research has shown that people who regularly get less than five hours of sleep are more likely to experience obesity, which can increase the risk of pregnancy problems and miscarriage.

Working nights or the "graveyard shift" may also affect your fertility. A 2019 study of 22,744 women discovered an association in which pregnant people (between 8 and 22 weeks) who had worked at least two night shifts in a week experienced a 32% increased risk of miscarriage in the week after they worked.

However, the research did not take into account other factors that could have affected the participants' fertility and did not prove a causal relationship. It is still unknown whether the night shifts were a factor or cause of the miscarriages.

Some ways to improve your sleep habits include:

Can't sleep because you have too many things on your mind? Try writing in a journal before bed or even simply writing out what you need to do the next day.

When people are stressed, they tend to eat in less healthy ways. Constant stress has been shown to lead to weight gain, and weight gain and obesity have in turn been linked to fertility problems. On the flip side, some people cope with stress by dieting or find that they lose their appetite when under a lot of pressure.

Research has discovered a connection between obesity and infertility in women. Even being slightly overweight may affect fertility. And it's not just women who need to watch the scale. Obesity can also negatively impact male fertility, leading to lower sperm counts.

Just as being overweight can lead to fertility problems, weighing too little or not eating enough can also affect your reproductive potential. Being significantly underweight can cause amenorrhea, and no menstrual cycle means no ovulation. Without ovulation, you can't get pregnant.

In general, nutrition experts recommend avoiding extreme dieting and diet plans that advocate for the elimination of entire food groups. There are "fertility diets" that preach some unsound practices, with little or no research behind their recommendations.

Being aware of diet and overall nutrition is advisable for anyone trying to conceive. A balanced diet, complete with whole grains, lots of veggies and fruits, healthy fats, and protein, is what most people should aim for.

Coping With the Emotional Stress of Infertility

Getting a healthy amount of exercise can help lower stress and lead to a healthier body. Exercise can also facilitate healthy weight management and weight loss if that is a factor for you. The U.S. Department of Health and Human Services recommends that adults engage in 150 and 300 minutes of exercise per week (75 to 150 minutes if the exercise is intense).

It's all about balance; too much exercise can have negative consequences for fertility. A surprising study looked at the effect exercise habits had on in vitro fertilization (IVF) outcomes. The study, which included about 2,000 women, found that people who said they worked out regularly were no more likely to conceive than women who said they never worked out.

Women who reported that they worked out four or more hours per week for the past one to nine years were 40% less likely to have a live birth from IVF.

The participants were also twice as likely to experience implantation failure or pregnancy loss and three times more likely to have a treatment cycle canceled. Generally, women who said they participated in cardio workouts (for example, aerobics, running, or swimming) had a 30% lower chance of a successful live birth after IVF.

If you're trying to lose weight, then you may need four hours or more a week of exercise. But if you just love the gym, based on the study, you may want to cut back a tad, at least on the cardio workouts.

At the extreme, if you have a problem with compulsive exercise, you risk negatively impacting your fertility, not to mention the risks to your overall health.

When you're feeling tired and stressed, a cup of coffee may help get your day started or get you over the afternoon hump. But does caffeine affect fertility? One study suggested that too much coffee (and the associated caffeine) can have a negative effect, especially if you already are dealing with fertility issues.

Researchers looked at couples who initially went through IVF treatment but then tried to conceive naturally. It was concluded that drinking four or more cups of coffee a day reduced a couple's chance of conceiving by 26%.

According to the Food and Drug Administration, healthy adults can drink a maximum of 400 milligrams (mg) of coffee per day (approximately 5 cups), but it really depends on the individual and their sensitivity to caffeine.

A 2016 study also found a possible link between miscarriage and caffeine intake. It observed that people trying to conceive and their partners who drank more than 200mg of caffeinated beverages a day were more likely to experience miscarriage.

Despite the conclusions of multiple studies, there is additional research that failed to find a connection between caffeine and fertility. You should talk to your health provider if you would like to know more about caffeine intake and your reproductive health.

Stress can lead some to consume alcohol. You probably already know that drinking and smoking are big "don'ts" when you're trying to get pregnant. But is just one glass of wine every now and then a problem?

A 2014 study concluded that women who are pregnant and consume four or more drinks per week are at an increased risk of miscarriage.

According to the March of Dimes, no amount of alcohol has been proven to be 100% safe in pregnancy. To be on the safe side, avoid drinking while you are trying to get pregnant and during pregnancy.

Habitual drinking also has a negative impact on sperm count. One study that evaluated the effect of alcohol consumption on IVF success found that for every additional drink a man consumed, the risk of conception not leading to a live birth increased by two to eight times.

If you smoke or vape, or have begun either of these habits again due to stress, you should be aware that this behavior can have a strong impact on fertility in both men and women. This is, of course, in addition to all the other negative health risks associated with smoking.

Male smoking has been found to decrease the odds of IVF success and possibly increase the risk of miscarriage. Secondhand smoke can harm fertility, too.

For couples not using assisted reproductive technologies like IVF, sex is a key part of conception. It also can be a good stress reliever. However, trying to keep up with life's busyness can make it tricky to find time for it, which can, ironically, make it stressful to schedule—especially when trying to conceive. Additionally, periods of stress can lower your libido, so you might not be in the mood.

Then, there's the effect of infertility on your sex life. Infertility may lower your libido, and in men, can also lead to impotence. If planned sex is causing problems in the bedroom, it might help to stop trying to time sex for ovulation. Instead, aim to have sex a few times a week to remove any extra goal-oriented pressure.

When a busy life schedule is getting in the way of your baby-making, you may need to be proactive in finding time for sex. For example, if you or your partner are feeling too tired at night, consider moving sex to the mornings. If the stress is also causing relationship problems, counseling may be helpful.

What You Want to Know About Baby-Making Sex

Stress itself may not directly cause infertility, but it can lead to lifestyle factors that may make it more difficult to get pregnant. Aside from the common stressors you may experience, you might discover that infertility itself causes tremendous stress.

To ease the feeling of being overwhelmed, consider seeing a therapist. Research has found that couples undergoing IVF treatment along with therapy were found to have double the conception success rate compared to their counterparts who were not in therapy.

Therapy may not directly help you get pregnant, but it may lower your stress levels, allowing you to make healthier lifestyle choices that, in turn, positively affect your reproductive health and fertility.

Mind-Body Therapies for Fertility and Stress Reduction
27 Sources
Verywell Family uses only high-quality sources, including peer-reviewed studies, to support the facts within our articles. Read our editorial process to learn more about how we fact-check and keep our content accurate, reliable, and trustworthy. 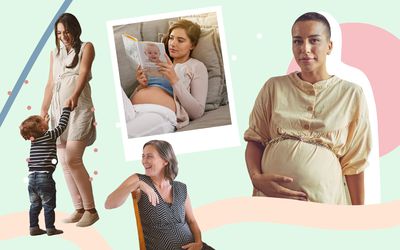