When kids or teens argue, scream, throw fits, spit, hit, get aggressive, or engage in other unrestrained behaviors, people often refer to these behaviors as acting out. There is no doubt these actions are unnerving and, at times, can seem to come out of nowhere. To further complicate matters, the reasons behind the behaviors are often complex.

Getting at the cause of this behavior is an important first step for parents regardless of whether it's your child that's having regular temper tantrums or your teen that's going through a rebellious streak. Here's what you need to know about why kids act out and what you can do to remedy the situation.

What Is Acting Out

Although most people know what "acting out" is, it's still important to provide a definition of acting out behavior before talking about the possible causes.

The expression "acting out" usually refers to problem behavior that is physically aggressive, destructive to property, verbally aggressive, or otherwise more severe than simple misbehavior. According to the American Psychological Association, acting out is defined as an extreme behavioral expression of emotions that relieves tension or communicates these emotions in a disguised or indirect way.

Overall, acting out is disruptive at any age and in any setting and often requires formal behavior intervention to manage it. Other words parents may use to describe this behavior include:

There are a number of possible reasons why children act out and few are as simple as "they're a bad kid." When a child acts out, the pattern of inappropriate behavior is often used to cover up deeper feelings of pain, fear, or loneliness.

Responding to that misbehavior in an inappropriate way or assuming the child is simply "bad," can leave the child feeling even more alone with whatever emotions they are coping with.

Simply blaming the behavior on a child being a bad kid, deepens their reasons for acting out instead of reducing them.

Often the reason for acting out is not obvious like being hungry or tired, but instead can be deeply buried. At times, the very act of a tantrum is meant to hide the source of the misbehavior from parents.

Taking a look at each of these possibilities—without dismissing them as not possible in your situation—is important in order to get to the root cause. You may be surprised to learn about the underlying cause of your child's misbehavior or tantrums. Here are some possible reasons why your child may be acting out.

Dealing With an Upsetting Situation

Some children act out because they are responding in a normal way to a situation that has upset them to the point where they are unable to manage their emotions. Sometimes, a child that acts out at school has been goaded into responding to other students in the class.

Then, they are disciplined for their actions when they were only responding to maltreatment. The punishment, in a sense, teaches the child that they do not have a right to be protected or have feelings, the opposite of what we wish for our children when it comes to building their self-esteem.

In other cases, a child may act out because of something that is happening outside of the immediate setting. For example, a child who is being bullied at school may "act out" their anger and frustration by misbehaving at home.

In some cases, children "act out" because of unrecognized sensory issues such as sensory processing disorder, that may be unrecognized. For example, many children with autism (and quite a few without a specific diagnosis) may have sensory challenges that make ordinary sights and sounds physically painful.

Imagine spending the day coping with constant discomfort in the form of blinking lights, squeaking chairs, and uncomfortable clothes. In such a situation, almost anyone would find it hard to stay calm. Talk to your child's doctor if you suspect your child has sensory issues.

Struggling With a Learning Disability

Another cause for "acting out" may be frustration due to undiagnosed or untreated learning disabilities. A child who has, for example, undiagnosed dyslexia will fall further and further behind in school.

Eventually, if these challenges are not addressed, they will be unable to learn in a typical classroom setting. Unless changes are made, they have nothing to do except get into trouble.

If your suspect that your child has a learning disability, talk to your child's teacher about your concerns. It also is helpful to discuss your child's struggles with their pediatrician. Your child's doctor can evaluate them or provide referrals where needed.

There are certainly some children who "act out" as a means of getting attention—positive or negative—from adults. It helps to use various parenting strategies for kids who often seek attention through negative behavior.

For instance, positive attention strategies may reduce bad behavior. There are also some behaviors, such as power struggles, that are sometimes best left ignored.

Reasons Tweens and Teens Act Out

Even as kids get older they don't necessarily stop acting out. Sometimes they will act out or rebel for the same reasons they did as a child—they are hungry, tired, stressed, or simply want attention.

They may even act out because they are being bullied, going through a breakup, or are having friendship issues. But other times, tweens and teens may act out for more complex reasons. Here are few reasons why your tween or teen may be acting out or engaging in inappropriate behavior.

Struggling With a Mental Health Condition

Some children "act out" because of untreated disorders. Some conditions which may be at the root of the behavior include attention-deficit hyperactivity disorder (ADHD), anxiety disorders, autism, and obsessive-compulsive disorder.

While all of these disorders can be effectively treated with a combination of therapies, treatment must also be appropriate and consistent. If you believe your teen is struggling with a mental health issue, talk to your child's doctor about your concerns. They can evaluate your child and provide a referral if needed.

There are also those kids who "act out" in order to impress peers. Even when this is the case, however, it's important to understand the motivation behind this need to impress.

In some cases these children are truly being ostracized or shunned by their peers and they are acting out for attention. In other cases, they're simply amusing themselves. Either way, if acting out is getting them the attention they crave, they will continue to misbehave.

During the tween and teen years, adolescents are trying to figure out who they are and how they want to behave in life. As a result, they often are rebellious and engage in risk-taking behaviors that allow them to test family boundaries, social boundaries, and personal boundaries.

Not only is this time in their life marked by more impulsiveness, but they also are more susceptible to peer pressure, which can lead them to experiment with activities that adults would find concerning. For some kids this might be as simple as breaking curfew while others might experiment with vaping.

Most of the time, this type of experimentation peaks in to mid- to late-adolescence and then will decline in their 20s. With proper support and intervention from the adults in their lives, these kids will learn how to manage their impulsiveness and make better choices.

What Teens Need to Know About Boundaries

How to Respond to Acting Out

Some experts believe you should look for the root cause of acting out before implementing a consequence or considering treatment. Others believe you won't understand a child's behavior all the time. After all, kids aren't always rational.

So while you may want to consider the underlying reasons for acting out, you may never really know. And the consequences you give may be effective, regardless of the cause of the behavior. Here are some general things to consider doing when your child acts out.

How to Use Behavior Modification When Kids Act Out

Although dealing with your kids acting out can be challenging in the heat of the moment, rest assured that all children act out at one time or another. But with proper intervention, most kids will learn how to respond to their emotions in a healthy way. So while it may be frustrating and overwhelming when it occurs, try to remain calm and address your child's behavior in a reasonable manner.

Eventually, with your direction your kids will learn how to manage their emotions. If your child's behavior continues to get worse or the acting out becomes more frequent, you may want to talk with your child's pediatrician. They can help determine what might be at the root of your child's behavior. They also can provide tips on managing these situations as well as provide referrals when necessary.

When to Get Help for Behavioral Problems
9 Sources
Verywell Family uses only high-quality sources, including peer-reviewed studies, to support the facts within our articles. Read our editorial process to learn more about how we fact-check and keep our content accurate, reliable, and trustworthy.
Additional Reading 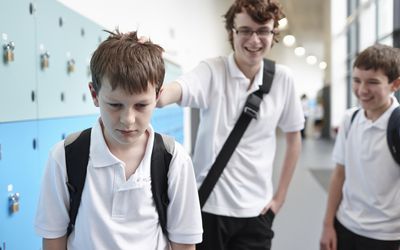 Externalizing Behaviors in Tweens and Teens